This page is being updated. 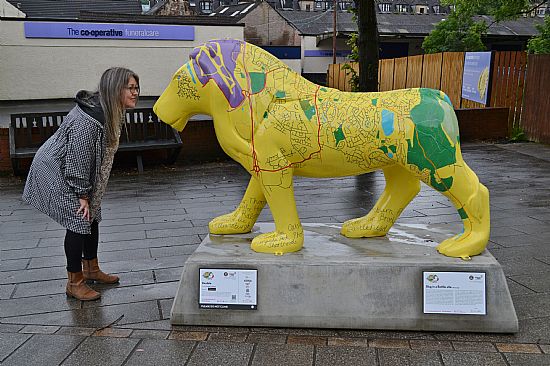 Ramble -  Between the waters and the roads, we move and live.

One of 25 artists selected by competition for Paisley First public art trail to paint a life-sized sculptural lion to celebrate the town and its history, to bring local people and visitors to Paisley and using art and culture to regenerate the town centre. My submission Ramble  has a hand-painted map of Paisley creating patterns like a blanket of history wrapped tight round its body. My starting point was the waterways which have shaped the landscape, industry and growth of the town. Throughout its history from the 6th Century the town has changed and grown and this map has each waterway and road around and in and out of Paisley.

The map is not for directional purposes or to highlight points of interest but more akin to an intricacy of threads winding their way, passing waterways and green spaces and connecting communities: Ralston, Williamsburgh, Foxbar, Gockston, Ferguslie, Castlehead, Gleniffer and more. I hope the artwork is an opportunity for townsfolk to view the full span of their town, as they find familiar spaces, their street, their home and a sense of pride within the boundaries of this historic place. 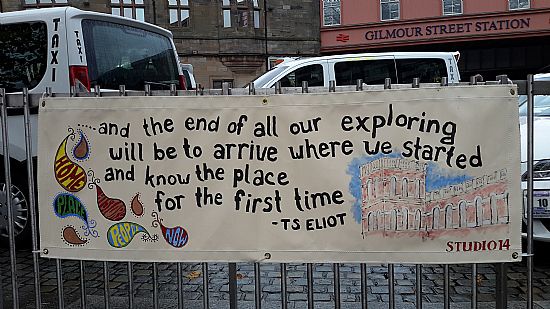 Part of a wonderful collaborative project from RMHAFF, Studio 14 art workshop joined other groups from across Paisley creating banners that were hung throughout the town describing how we felt about our town; it's history, our connection to this place, our hopes for the future.

After the success of Weaving Musical Threads art festival, I joined with Elise Kelly and Judy Brunton founding a new arts organisation Weaving Musical Threads (WMT) which went on to develop and organise other major cultural events within Paisley , developing collaborations and projects like Mill Girls on Tour and building partnerships with other cultural groups like RMHAFF, Paisley Thread Mill Museum and West College Scotland. To find out more about WMT contact Elise Kelly www.weavingmusicalthreads.com 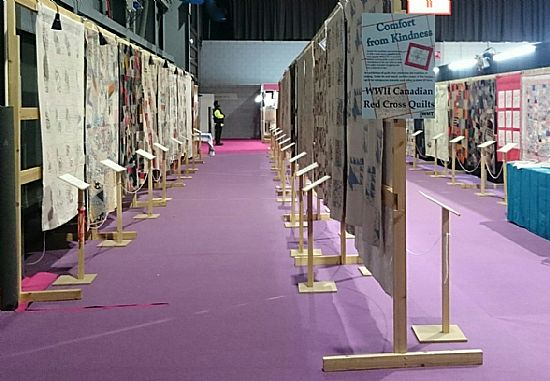 An outstanding exhibition of quilts made by thousands of women (and men) during WW2 across Canada for the Canadian Red Cross which distributed them to troops returning from Japan and mainly to England for armed forces and people affected by the destruction of the bombing.

A cross country tour in Scotland and northern England taking Mill Girls on Tour - a production of poetry, music, theatre and projection celebrating and telling the story of the thousands of women who worked in Paisley's great thread mills during the 19th & 20th centuries. 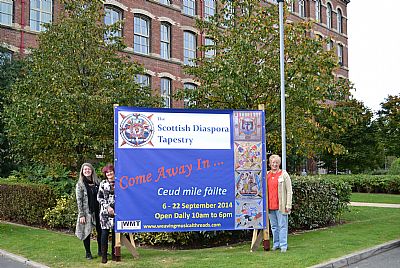 It was an honour and pleasure for WMT to host this beautiful tapestry, one of the biggest community projects in Scotland and stitched my hundreds of people all over the world. And its only visit to the west of Scotland. 217 panels depicting personal experience and stories of Scotland's culture and influence across the world. With accompanying workshops, talks and events.

The Great Tapestry of Scotland Exhibition 2014

This was a coming home for this beautiful tapestry to be exhibited in one of Paisley's historic mill buildings at the old Anchor Mill site, where once most of the world's threads were manufactured. For 6 weeks, WMT and local museum Paisley Thread Mill Museum hosted this great tapestry with a18,500 visitors coming to see the history of Scotland. A full programme of events, talks, workshops and a boost to Paisley and its regeneration. 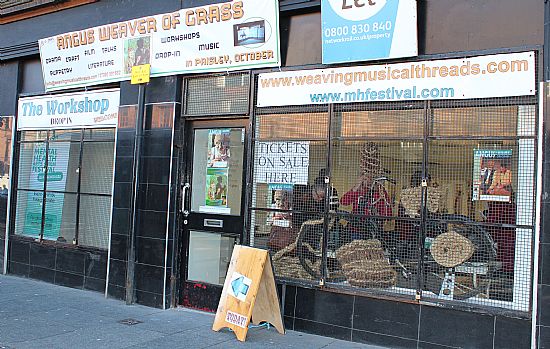 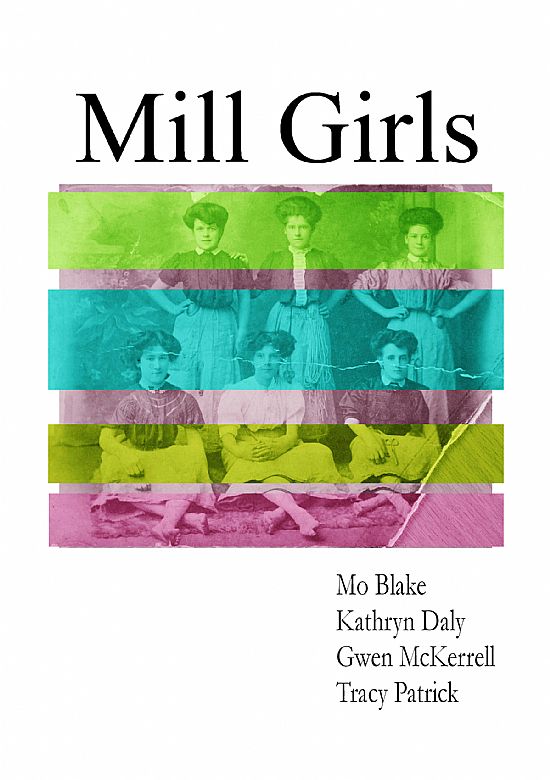 The anthology developed from the production Mill Girls on Tour 2013 which remembered and celebrated the lives of women who worked in the great Paisley thread mills during the 19th & 20th Centuries. Central to the design of the cover is an image from the archives of Paisley Thread Mill Museum taken in the late 19th century. Transformed through colour bands to represent the spirit of the women who brought a special energy to the town where they worked. The colour continues inside the book with tinted photographs, a mix of edited archival images and my own, representing the coloured threads that were made in the factories. The design of the anthology was created in a simple, elegant layout to best display the thoughtful and insightful work of the poets Mo Blake, Kathryn Daly, Gwen McKerrell and Tracy Patrick. Copies are available to purchase from www.weavingmusicalthreads.com

2011-12 I joined Renfrewshire Musical Threads in 2011, working within the steering group to organise an arts festival, Weaving Musical Threads, which took place during Music Nation, 3-4 March 2012, a weekend of music and the arts across Britain to celebrate the London Festival of Culture, part of the Cultural Olympiad 2012. Never before had the region experienced such an arts festival. With 19 venues, 78 events and over 300 participants, it was a spectacular weekend involving all the arts - music, film, sculpture, literature, song, visual art, drama and heritage.  It inspired collaboration, developing cultural links across Renfrewshire and building the region’s reputation within Renfrewshire and Scotland. A time to celebrate Renfrewshire's history, its people and place in the world.